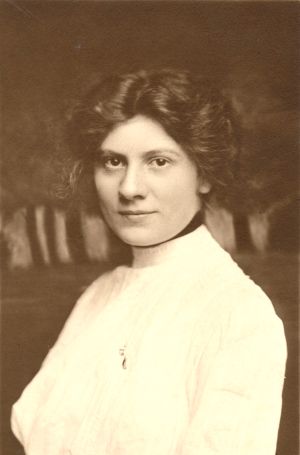 Christine at about the time she undertook her trip to Europe

My castles were across the sea or still within my mind. –Rod McKuen from “The Sea”

One hundred years ago Christine Lebline, who later became my grandmother, began the largest adventure in her life to that point.  Born in 1888 and reared in a farm family in the southern Indiana hamlet of Rockford, Indiana, Christine undertook a journey to Europe during the summer of 1911.  In a journal she kept during her adventure, she stated that this trip was “the one thing I had dreamed of for so many, many years.”

In June of 1911, Christine was a 22 year-old schoolteacher just one year out of Indiana University.  She had been the first college graduate in her family in 1910 and was about to become the first to travel across the Atlantic since her grandfather had immigrated to the U. S. from Germany in the early 1850s.  During her time in Europe, Christine mostly traveled alone, although she did meet others along the way and occasionally shared experiences with them before moving on.

A few years ago, I obtained a copy of the journal Christine kept during her trip.  In commemoration this year (2011) of the 100th Anniversary of her voyage, I decided to share selected portions of Christine’s journal in “real time” with friends on my Facebook page.  I posted each selection close to the date it had been written one-hundred years earlier.  I found this caused Christine’s experiences to be even more relevant and meaningful for me.

The journal excerpts begin while Christine was in New York City awaiting the departure of  her steamship named the “Hamburg” from New York bound for Rome.   The final segment of the journal that I shared was written on the day that Christine went ashore in Gibraltar and got her initial exposure to the sights and people of Europe.

When I began the WordPress website of my writings earlier this year, I understood even then that some of my writings would be “collaborative” with my grandmother, although I wasn’t exactly sure how.  This piece is one example of such collaboration since it is almost entirely her words.  They offer you–and me–a window through which to view this most important and formative time in Christine’s young-adult life.

Let’s now join Christine as she undertakes her journey to Europe eight years before women received the right to vote in the United States.  I trust that you too will be inspired by her vitality and wide-eyed appreciation for all she sees and does.  Let’s relive the dream! 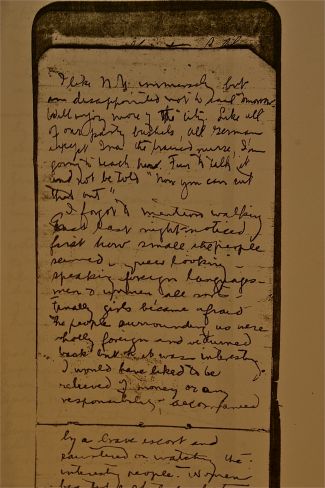 “I like N. Y. [New York] immensely but am disappointed not to sail tomorrow. [Her steamship’s departure had been delayed because of a cholera quarantine.] Will enjoy more of the city. I forgot to mention walking East [in the city] last night–noticed first how small the people seemed–speaking foreign languages–men & women all sorts–finally the girls [her companions] became afraid–the people around us were wholly foreign and we turned back, but oh it was interesting. I would have liked to be relieved of money or any responsibility–accompanied by a brave escort and sauntered on watching the interesting people…” 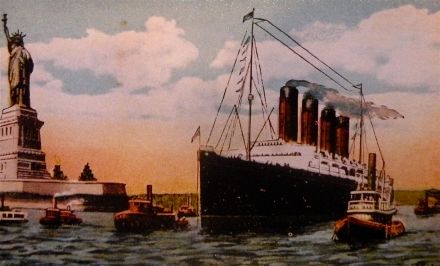 “…Just heard we sail tomorrow at 4 P.M. … Feeling excellently well, and happy to be able to do N. Y. alone [today]–eating frugally for two reasons, each one of supreme importance. Going to ‘Folies of 1911’ on the Roof Garden tonight–wonder if another adventure is in store? Hard to find a department store of sufficient insignificance to keep in stock the little ordinary things I want. My comprehension of a place of such wealth and boundless breadth must grow…”

It is 4:00 PM on June 28, 2011–exactly 100 years after Christine Lebline set sail from New York aboard a Hamburg-Amerika Line steamship bound for Rome. In her words, this trip was to be “an education!”

“So much has happened. Ravishing and fascinating “Folies of 1911″ in that beautiful Roof Garden was delightful to eye and ear–lovely Bea McCoy & clever Bert Williams and Ray B. to tell the latest N.Y. stunts…boarding the steamship and leaving the harbor. Made friends with a New Yorker who has made 8 or 10 trips abroad. Sang songs, moon, water, beautiful…Next morning–many seasick but I’m feeling good and helping others. Met another New Yorker, handsome devil. Saturday night–Italian songs and Italian boys–how I like them…”

“Days are so happy and full. I don’t find time to even write here to say nothing of writing letters [home]. In the afternoon they posted a notice of small pox on board–everyone vaccinated. Lovely sky and a sailing ship on the starboard, three masts, full-rigged, very rare nowadays, most beautiful. Watched it a long time from the upper deck with Joe…” 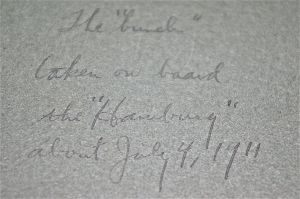 This is the caption written by Christine on the back of this photo taken aboard the steamer “Hamburg” in July 1911. (Although individuals are not identified, Christine is standing second from right.)

“Unusual experiences every moment–eye openers of how the rest of the world lives and thinks. For although they play cards profusely and drink etc., they have worked and thought. Good ideas even in heads foreign. For instance, ‘Roc’ and the Italian woman’s ideas on socialism; the wife of a millionaire chef; Mr. Ryan, very well read, can talk on any subject learned, a traveler and attracts all the young around him. Everybody older in experience and thought it seems than I. Once in a while I get the feeling of being entirely alone–everybody so different, so world-wise, yet very interesting exceedingly to me…” 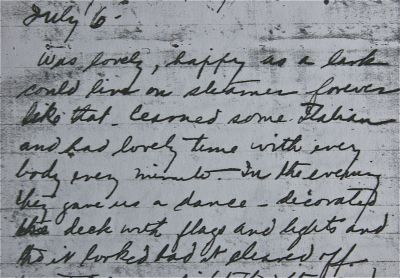 July 6, 1911  Was lovely, happy as a lark, could live on a steamer forever; learned some Italian and had lovely time with everybody every minute. In the evening they gave us a dance–decorated the deck with flags and lights and though it looked bad, it cleared off–beautiful moonlight…Didn’t dress at first but everybody else [was] on floor so ran down, slipped on my ‘pink’ in a jiffy and got [back] up in time for the third dance. Danced the five-step with Phil and it was lovely. He had just taught it to me before and we were the only ones who danced it and it was so daring of me; it’s a wonder I got through because everyone looked on. But Phil said I did well. I don’t know about that but it was the loveliest dance I ever had in my life. I danced every dance and then stayed with the bunch for a serenade afterwards. Oh, I was in heaven almost that night. Phil was simply adorable, admiring and brotherly all in one…

Strait of Gibraltar – Gateway to the Mediterranean

July 7, 1911
…we came into sight of Gibraltar and the beautiful hills of Spain. Exciting boarding the tinder to go ashore…Once ashore we took a carriage through the town, saw walls and a graveyard. A French man-of-war was in the largest dry docks in the world. Shopping in the Moorish stores, great bargaining on every side, got candy and strawberries…Talked it all over after returning to the ship with Phil and Mr. Ryan. Went down to my room tired but feeling that the whole experience–the quaintness and curious costumes was a dream too lovely to be real. All these things leave pictures on my mind–the houses, the soldiers, the water, moonlight, rocks and rugged trees…

Christine’s “dream” continued.  She traveled both alone and in the company of others through Italy, Switzerland, Germany, the Netherlands, Belgium, France, and Britain.  In her journal, she writes luxuriantly about the antiquities and artworks of Europe and the opportunities she had to use her German and French language skills.  She walked on a glacier in Switzerland.  At the end of August, she sailed back to the U.S. on another steamship from Glasgow to Montreal.  On the voyage back across the Atlantic, she was amazed at the many icebergs the ship passed.  The following spring, one such iceberg  claimed the Titanic.

After returning to Indiana, Christine re-entered her life as a high school teacher in a small town.  Two years later, she married my grandfather and lived the rest of her life as a farmer in Rockford.  She did travel internationally again–once to Mexico by bus in the 1950s, and then back to Europe (Spain) in the early 1960s to visit her son who was living there then.  But Christine never kept another journal nor did she ever talk much about her earlier European adventure as a young adult–and its embedded dream.  Now she has spoken.

These journal entries, photos and commentary were complied and written by Steve Robert Simmons in 2011.  All rights reserved.

6 Responses to Reliving the Dream