Steve Enos and his mules in about 1910

Do you know your name?  I mean, do you really know your name?  I don’t remember ever being asked that question, even when I was young.  I guess it’s just assumed that everyone knows her or his name; it’s one of the first things we learn as a child—and that does it.  In facilitating retreats and workshops on writing about one’s life, one of the best exercises I can do is have participants consider the meanings and origins of their names.  A few say, “I don’t know where I got my name—it’s just always been with me.”  However, others have heart-warming, and sometimes heart-rending, stories behind their names.  My story is a combination of both.

My mother gave the explanation for my name with which I most resonate.  She described to me how I had been named for her great-uncle, Stephen Enos, who died suddenly at age 56 just two months before she was born.  I have a hunch that if my mother had been a boy, she would have been named Stephen because Steve Enos was so highly admired by her father John.  He told her that he considered Steve Enos to be “the finest man I ever knew.”

I was born in 1946.  Stephen was a fairly common name then—it ranked number 31 in the popularity charts.  Stephen, of course, is also a biblical name, but I doubt that had much influence on my parents’ choice since they had distanced themselves from their Methodist upbringings by the time I was born.  Stephen in the Bible was the first martyr of the Christian era, and is described in the book of Acts as “full of grace and power” with “the face of an angel.”  I can live with that.  But my name is actually Steve, not Stephen.  My common-sense father reasoned that most people would call me Steve anyway, so “let’s just name him that in the first place.”

While growing up, I was aware that there were few people of prominence who shared the name Steve.  There were no Presidents and few other key figures in U.S. history who had the name Steve.  Stephen A. Douglas who debated Abraham Lincoln in the 1850s comes to my mind, although he was not a prominent figure.  There was a popular television personality in the 1950s, Steve Allen, and then there was pop singer Stevie Wonder and actor Steve McQueen a bit later.  Yet the fact remains that the name Steve was not one associated with the top newsmakers during my formative years. 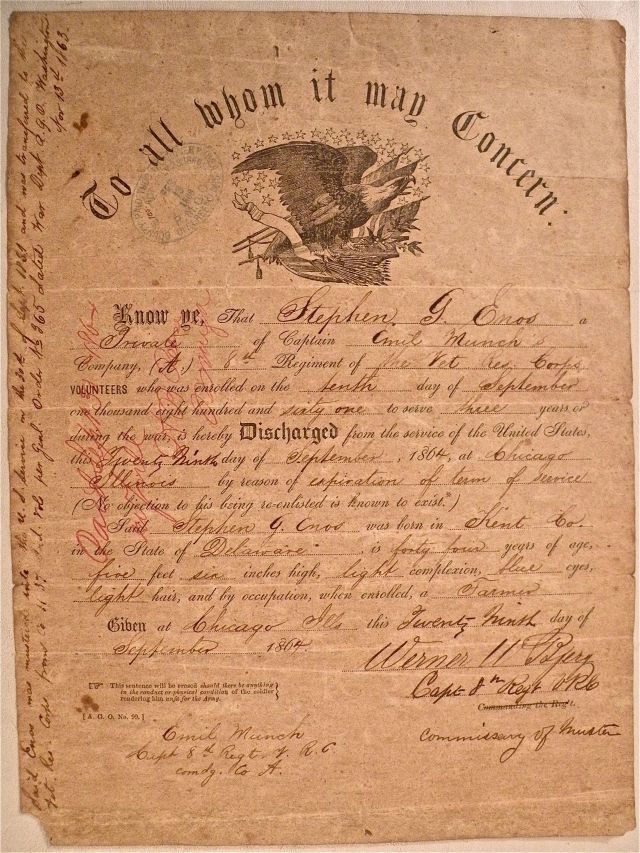 Discharge of Stephen G. Enos from the Civil War

Even within my family, Steve is a rare name.  There were only two others before me that I know of—Stephen E. Enos for whom I was named–and his father, Stephen G. Enos.  The elder Steve Enos was born in Delaware in 1823 and moved to Indiana in the early 1850s.  He later served as a soldier in the Union Army during the Civil War, and although I have no photographs of this Steve Enos, he was described in his discharge from the war in 1864 as: “five feet six inches high, light complexion, blue eyes, light hair, and when enrolled, a Farmer.”  His son, the Stephen Enos for whom I was named, was born in early 1862 just a few months after his father left to go to the war.  He probably seldom saw his father during his first three years of life.  His father apparently died sometime in the late 1870s and only he, his mother Ellenor, and his sister Alice were living together at the time of the 1880 census.  At about that time Steve, just eighteen years old, acquired forty acres in Rockford, Indiana, and he farmed that land for the rest of his life.

Sometime during the 1880s Steve Enos began to court Jennie Rapp, four years his senior, who was the daughter of a neighbor.  They married in 1890 and their first son, James, was born a year later.  Jennie’s brother, Will, and Steve Enos were both farmers in the tiny community of Rockford, and they became even closer as brothers-in-law.  Will’s son, John, was very fond of his Uncle Steve, and after he married Christine Lebline in 1913,  the Enos and Rapp families were closely associated.  John and Christine eventually became my maternal grandparents.

Left to right: John Rapp, Steve Enos, James Enos, and Jennie Rapp Enos together in about 1915

James Enos was away from Rockford serving in the Army during World War I at the time his father died in a tragic farm accident in April 1918.  He was immediately summoned home, received his discharge from the service and began operating his family’s farm.  James married my Aunt Ruth in 1920 and they lived and worked for the rest of their lives on that same land.

My capacity to identify with my namesake, Steve Enos, was greatly enhanced when I received some photographs of him from my Aunt Ruth while visiting her during my college years.  These photos interested me then, and even more so now.  One shows Steve Enos with two draft mules standing in front of his barn, the same barn I knew when I went there as a boy.  Steve is wearing overalls, a striped shirt and suspenders, a teamster’s hat, and is holding ropes tied to his animals.  A mule expert from the University of Wyoming, with whom I shared this picture, noted that the mules were probably bred by crossing a mammoth donkey sire with a Percheron draft horse mare, which was a popular combination during that early 1900s time period.  This expert also observed, “You can tell by the way your great-great uncle is hold the animals that he is very proud of them!”

Over time, I’ve become even more curious about Steve Enos’ connection to his draft mules.  Only a few farmers in his area of Indiana or within our family used mules; most favored draft horses.  Mules have traditionally been more popular in states like Kentucky, Tennessee and Missouri.  However, Jackson County, Indiana (where Steve Enos farmed), is not very far from Kentucky, so he could have easily acquired mule stock and expertise about farming with mules.

Mules have a long history as draft animals dating back thousands of years.  As noted earlier, a mule is the cross of a horse and a donkey, and its “hybrid vigor” is thought by some to give mules superior intelligence.  Mules are also hardier than horses, require less feed, and are suited to working in stressful environments.  In this regard, one of my earliest impressions of mules came through a popular television show in the 1950s titled Death Valley Days.  Death Valley is one of the harshest places on earth, and I understood that even as a boy.  One image I formed through that program was of teams of mules pulling heavy wagons filled with Borax through the intense heat of Death Valley.  I’ve since learned that the typical “twenty mule team” actually had eighteen mules (plus two draft horses), and could pull wagons weighing 36 tons over a distance of 165 miles at an average of 17 miles per day.  Now that’s endurance under stress!

Another connection I had to mules as a child was through a series of movies in the first half of the 1950s that starred “Francis the talking mule.”   These fanciful films were about an Army mule that would talk—at least to some people.  They were popular with my neighborhood chums, although I don’t think I ever actually saw any of those films myself.  However, through my friends’ accounts of these movies, I was impressed with the idea that mules are intelligent, and smarter than some people.

I can remember watching on television the mule that was the mascot for the West Point Military Academy.  It regularly appeared on the sidelines at the Army-Navy football game each year.  A mule first became the West Point mascot in 1899, and it made sense because the Army has used mules as draft animals for a long time.  I’ve even learned that the Army still uses mules as pack animals in extreme situations where terrain and conditions are too rugged for motorized vehicles or aircraft.  And, of course, it’s no coincidence that mules have been the sure-footed choice to carry tourists on the perilous Bright Angel Trail into and out of the Grand Canyon.  Mules are cautious animals—more so than horses—and are not inclined to put their riders into harm’s way.  Ferde Grofe’s colorful “On the Trail” movement from his Grand Canyon Suite, initially performed in 1931, includes sounds of braying mules (simulated by the orchestral instruments), and attests to the longstanding use of pack mules in the Grand Canyon.

Steve Enos and mules in about 1910

It’s possible that Steve Enos was drawn to using mules on his farm precisely because of their high intelligence.  The University of Wyoming mule expert explained that, because of mules’ intelligence, not everyone gets along well with them.  She noted that mules can’t be overworked as easily as horses can.  A horse will work until it drops, but not so a mule.  They seem to understand when they have had enough, and they don’t willingly work longer than that.  This probably gave birth to the expression “stubborn as a mule.”  Based on what I know about him, I have a hunch that Steve Enos was drawn to this good-sense quality of mules.  He would have also appreciated the fact that mules, unlike draft horses, will readily pull a row crop cultivator through a cornfield without stomping on the plants with their feet.  I once found a “jockey wheel” in the Enos barn that dated to the time when Steve Enos operated the farm.  This is a disk that bolts onto the tongue of a cultivator “to keep horses feet off plants.”  This contraption was probably used only with his draft horses because it would not have been needed when mules were used. 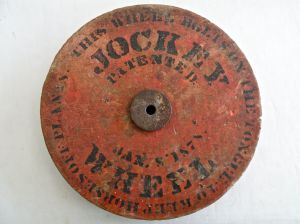 I expect that Steve Enos also appreciated his mules for their loyalty.  When treated well, a strong bond can form between a draft mule and its handler. I guess it’s not too different from the fond connection that forms between shepherds and their intelligent sheep dogs.   Part of what endeared Steve Enos to my Grandfather John and his neighbors was his loyalty.   Loyal mules—and loyal Steve—they just belonged together.

A loyal friend--Border Collie Trish with Steve in 1995

I’ve never worked with a draft mule, but I have known the loyalty of the sheep dogs I’ve owned as pets.  I’ve known the loyalty of human friends as well.  “Loyal” isn’t an attribute one uses lightly to describe just any friend; it is earned as one shares that friend’s life over a substantial period of time.  Loyalty is a complex trait combining trust, faithfulness, devotion—and steadiness.   Whether I am regarded by my friends as loyal is not for me to say; it’s their judgment to make.  But I do know I was at one time regarded as having the quality of steadiness by a friend in college—she even gave me the short-lived nickname “Steady Steve.”  I didn’t necessarily regard the name as a compliment then since being a rebel and unpredictable was considered by some as more admirable during that turbulent 1960s time period.  But now the thought of being known as “Steady Steve” feels just fine.  If this quality of steadiness translates over time into also being considered by my friends as loyal, I would welcome that too.

Loyal Steve—and loyal Steve—it would feel good to know they just belonged together.

This essay was written by Steve Robert Simmons in 2011.  All rights reserved.

6 Responses to Knowing My Name