With these words concluding the acknowledgment I’d written for my essay A Sacred Journey in fall 2015, I expressed an aspiration. I had briefly met Scottish golfer Elis Reekie at a coffee house in tiny St. Monans, Fife—not at a golf course. Yet even in that context I sensed in her a kindred spirit, and over subsequent months of email exchanges, a significant friendship emerged.

Through our correspondences Elis and I explored mutual interests in golf, music, and nature. She became acquainted with my wife Mary Ann, our daughters and grandchildren. Mary Ann and I also happened to travel coast-to-coast in the U.S. by automobile, and in a sense Elis came along with us via the email travelogues I sent to her. I shared the unfolding saga of my learning to play golf with hickory-shafted clubs, which included stories of rounds played on historic “hickory-friendly” courses I discovered along the way.

Elis, in turn, gave me accounts of the competitions and other events in which she participated at the golf club in Fife where she’s a member—and of the waxing and waning of her golfing handicap. She also informed me about her involvements in community activities such as the Crail village choir and her regular moderations of a Quiz Night at her club.

We shared significant milestones in our lives too.  I, for example, informed Elis when my 97 year-old mother died suddenly of a stroke in April 2016.  I then sensed a desire to take a “Sanctuary Sojourn” to Scotland in the aftermath of my mother’s passing.  It would be a time away from the usual hustle and bustle to give Mary Ann and me an opportunity to reflect and renew.  And as our plans took shape, the prospect of playing golf with my Scottish golfing friend Elis became a high priority for me. Mary Ann and I decided to spend the first week of our Sojourn in Fife—the home of golf—and the home of Elis.

And now the time had come for Elis and me to experience our first round of golf together.

“I have a gift for you, Steve. It’s a British coin; I expect you’ll find it useful as a ball mark on the greens. I hope you don’t mind that it is such an ancient coin.” I took the coin from Elis and examined it. It was a halfpenny, a type of British coin that is no longer used. Then I noticed its date—1946—my birth year. I was touched by the symbolism of Elis’ gift—and I also smiled at her jesting about the coin’s antiquity. I thanked her; my gratitude came from the bottom of my heart.

By the Standing Stanes at Lundin Ladies Golf Course

I’d chosen for our initial round to be at the nine-hole Lundin Ladies Golf Course located along the south coast of Fife. I’d briefly visited the course during my Sacred Journey pilgrimage the previous year, although I’d not actually played a full round there. Elis had never been to the course before.

The Lundin Ladies Golf Club was constituted in 1891 and today it is one of the only golf clubs in the world exclusively operated by and for women. Men are permitted to play the course, but are not members. Famed architect James Braid designed the course in 1910. Most uniquely, the fairway of the 2nd hole contains three massive red sandstone pillars that are all that remains of a large ceremonial complex that existed on the site 5000 to 6000 years ago. It’s considered to be one of the most significant prehistoric sites in Fife, and is certainly one of the most fascinating features I’ve ever encountered on a golf course.

On the 9th tee at Lundin Ladies Golf Course

Elis and I began our round in high spirits; Mary Ann walked along with us as our chief encourager and photographer. I’d seen still pictures of Elis playing golf, of course, but this was different—I was actually with her. Elis scorched the first nine holes with an impressive score of three-over par 37! I couldn’t quite match that, but I did have a 41, which is a respectable score for me with my hickory clubs.

For our second nine holes we chose to play an alternate-shot team approach similar to that used in the Ryder Cup. Neither of us shot well, but we shrugged it off and pointed towards our next round the following day at Balcomie Links.

The Balcomie course, operated by the Crail Golfing Society, is one of Scotland’s finest layouts. Designed by the legendary Old Tom Morris in 1895, it’s a “must play” venue for many American golfers in Scotland. In fact, one of my closest golfing friends in the U.S. who has played almost every major course in Scotland regards Balcomie Links as among his favorites. It’s also Elis’ home course, so it was with excitement that Mary Ann and I met her that Friday morning to begin our second round.

It was a breezy day, which isn’t surprising; Crail is reputed to be the windiest course in Scotland. As we began our round, Elis instructed me on the protocol for golf at Balcomie. For instance, men use the yellow tees, women the red ones. She patiently guided me toward the preferred lines for my shots on each hole, which is valuable when a player is at an unfamiliar course. And she also introduced me to unique Scottish golfing expressions I’d never heard before. For example, I learned that if a player says to another, “Dead sheep!” it means “Still ewe,” which translates “It’s still your turn.” That is not what a golfer wants to hear.

Within a few holes it became clear that neither Elis nor I was going to score well on this day, so we settled into a congenial round that included some occasional fine shots—and many not-so-fine ones. Mary Ann accompanied us through the round, although she became reluctant to give me putting advice on the tricky links-style greens. At one point Mary Ann remarked to me: “That putt looks like it breaks four different directions, Steve! I’d say just go straight towards the hole.” I followed her advice.

One of the championship trophies that Elis has won at Crail

After our round, Elis gave Mary Ann and me a tour of the Crail clubhouse. It included a look at cases containing many trophies and other golf memorabilia spanning the long history of the club. Elis’ name is inscribed as winner of several of the club competitions. I was impressed.

My choosing to play golf with hickory-shafted clubs initially perplexed Elis; it does most people. After all, why would anyone choose to make an already-difficult game even harder? I don’t have a good answer to that question other than to say my decision two years ago to begin playing golf with vintage clubs has piqued my interest in the game more than ever.

Somewhere during our consideration of courses we might play together I learned about Kingarrock, a classic nine-hole hickory-era course on the grounds of the historic Hill of Tarvit mansion in Fife. The National Trust for Scotland now administers it. This course is unique because any golfers who play it must use original hickory golf clubs and 1920s replica balls. Being a good sport, Elis agreed to give hickory golf a try at Kingarrock for our third round–and we even dressed up for the occasion.

Our nine holes at Kingarrock were more an exercise in historic reenactment than exemplary golf. The rough is trimmed by sheep kept in small pens and rotated around the course. When the attendant instructed us about the ground rules, he said: “The rough is rather long today. If you hit your ball into it, it’s probably lost and you’re best to just leave it and keep playing. The ball will be found again the next time the sheep come around to graze.” He gave each of us four balls (eight in total) to use over nine holes. That attendant clearly was a man of little faith. 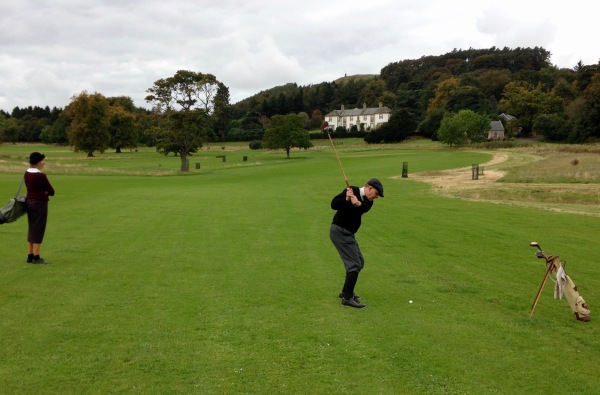 During our round at Kingarrock; the Hill of Tarvit mansion is in the background

During the final round at Balcomie Links

It was Mary Ann’s and my last full day in Fife. We arranged to meet Elis at Balcomie Links for our final round of golf together; it seemed right to me that we should finish on her home course. I was hopeful that we might each have a stellar round and conclude on a high note, but that wasn’t to be. The elements turned against us and the rain and wind came. I played well from tee-to-green but my putter took the day off. Elis had a tough round too. Most of the other players on the course that day quit early because of the foul weather, so we had the place to ourselves by the time we finished the last hole.   As we walked back to the clubhouse, I found myself subdued as it settled in for me that this time with our special Scottish golfing friend Elis was coming to a close.

Waiting for a miracle assumes there is not one already happening.  –Carrie Newcomer

Mary Ann and I arranged to have our final dinner with Elis at the Kalliope House residence where we stayed during our time in Fife. The proprietors, Leila and Philip, went all out to make it a festive occasion for us. Besides sharing a sumptuous meal, we listened to music by Archie Fisher and Carrie Newcomer, two of the artists we had shared with each other as our friendship developed during the previous year. I read a poem (in Hoosier dialect) by Indiana poet James Whitcomb Riley; Elis read a favorite poem of her’s. It was a rich time.

The evening passed quickly, and as the time approached for Elis to depart I reviewed in my mind the path of our friendship since our unlikely connection at East Pier Smokehouse in St. Monans a year earlier. I searched for words I might share at this miraculous moment.

Then I recalled the words from a famous song of long-ago by British singer Vera Lynn.  They had come into my mind earlier in the day. As I told of the song, Elis responded: “Oh, Vera Lynn was one of my father’s favorite singers!” I knew then that these were the words I was meant to share:

But I know we’ll meet again,

And we will meet again—and golf together again—somewhere, somehow. I can just feel it.

After all, without hope there is no golf. 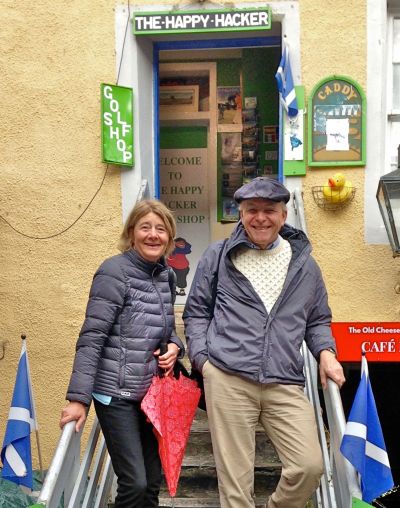